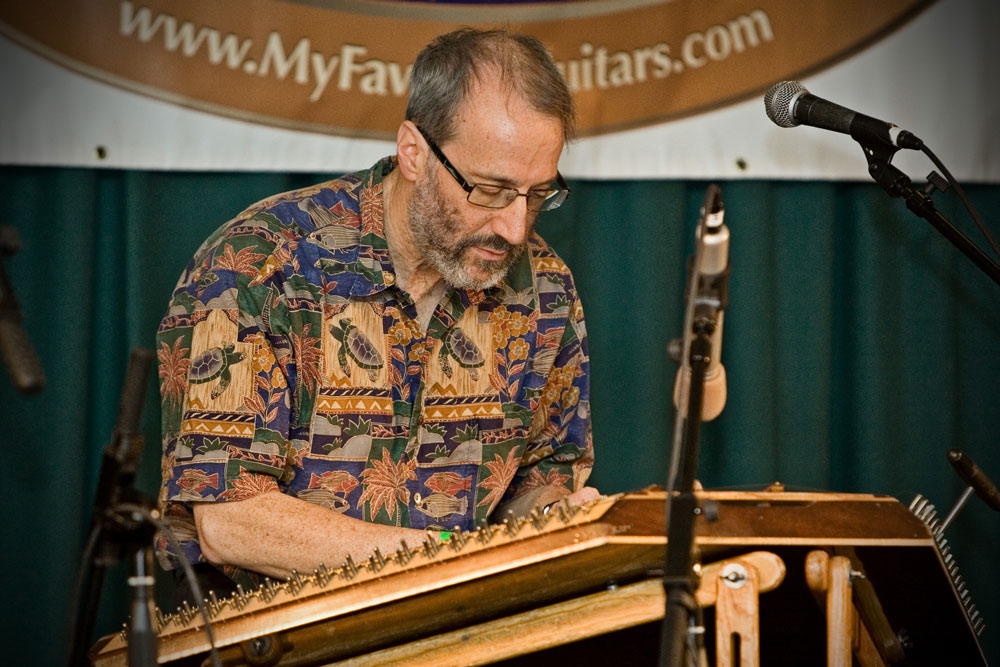 Stu Janis is a musician based in Hudson, Wisconsin (a suburb of Minneapolis/St. Paul, MN). While his favorite and primary instrument is the hammered dulcimer, he also performs on bowed psaltery, tsimbl, Anglo concertina, and handpan.

Stu began playing hammered dulcimer in the early '80s in Wilmington, North Carolina, having grown up with piano and flute lessons in Pittsburgh, Pennsylvania. While mostly self-taught on the dulcimer, he benefited from friends, workshops, and other musicians.

Currently, Stu performs with Greenwood Tree, Eisner's Klezmorim, and Neptune's Keep, and he also accompanies area choirs on unique arrangements for choir and hammered dulcimer by Malcolm Dalglish, Diane Laura Rains, and others. In years past he's been a frontman and puppeteer with Freshwater Pearls Puppetry, and he was also the musician for the Vorpal Sword English Rapper dance group.

Some of Stu's favorite performances are with his wife, Diane Laura Rains, choral composer and also the leader of Neptune's Keep. In 1985, she created Freshwater Pearls Puppetry and brought him in as a musician and frontman. He was so good, she decided to marry him! Although Freshwater Pearls is on permanent hiatus, they made lots of kids happy all around the upper Midwest. Diane is a multi-faceted artist with many talents, and you can see all her creative activities at faebynature.com.

Outside the realm of music, Stu retired from 3M in 2018 after 34 years as an industrial statistician and internal business consultant, and his claim to the title of "Best Hammered Dulcimist" in the American Society for Quality has yet to be challenged.

While Stu hasn't made any solo recordings to date, he's recorded with Greenwood Tree and Neptune's Keep. You can find more information at:

Stu's start on the dulcimer

Timing is everything! It was probably around Christmas of 1980 when Stu's younger sister attended a harp festival and bought a hammered dulcimer record by Douglas Ecker called More Path Rent. She was so enamored with it that she insisted he listen right away. Stu has no memory of it, buttressing her claim that he's always ignored her ;-)

About six months later, Stu finished his MS degree in Statistics from the University of Wisconsin and in August 1981, got a job with Corning Glass Works in Wilmington, North Carolina. They were short of office space, and he was put in a cubicle with David Shucavage, who has since moved on to bigger and better things. Dave is a dulcimist, and he was playing at the Piney Woods Festival a couple of weekends later. Being new in town with nothing to do, Stu went.

Dave got Stu playing pennywhistle in the "Mud Flats String Band" (Stu says, "we weren't very good, but there wasn't much competition"), and he occasionally played back-up piano at Dave's other performances. Dave also organized square and contra dances in the area. One day, the caller quit on relatively short notice and Dave decided to take on calling duties. This left a vacancy on dulcimer, so Stu started playing around on one of Dave's instruments. Six weeks later, in late 1982 or early 1983, he played one tune at a dance.

Shortly thereafter, Corning decided Stu had no growth potential with them, and he was unemployed for five months. He took advantage of that employment gap, learning a lot more about the dulcimer and greatly improving his skills. He moved to Minnesota in 1984 to be an industrial statistician at 3M and found a thriving traditional music community. By the end of the next year, he was playing in a contra dance band, teaching dulcimer at the Homestead Pickin Parlor, and had joined up with guitarist Bill Cagley to form Greenwood Tree, all of which he continues to do 30 plus years later.

The ultimate irony is that about four hours after Stu accepted his job with Corning in 1981, he got a call from 3M - from the same person who ended up hiring him in 1984 - inviting him up for a job interview. Had the timing been slightly off and 3M had called first, Stu may have never made it to Wilmington and never learned about hammered dulcimers.